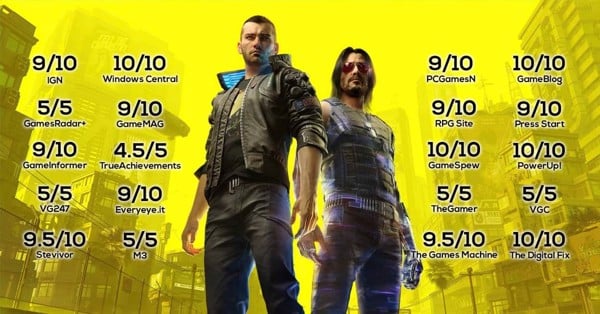 "[I]t's hard to get into Cyberpunk 2077's world in general. So much of it is superficial set dressing, and there's so much happening all around you--ads going off at all times, gunfights breaking out in the streets, texts coming in about cars you'll never buy--that a lot of the game feels superfluous. The side quests and the characters they showcase are the shining beacon through the neon-soaked bleakness of Night City, and they give you room to explore the best the core RPG mechanics have to offer. These are what carried me through an otherwise disappointing experience." -- Kallie Plagge [Full Review]

"Cyberpunk 2077 kicks you into its beautiful and dazzlingly dense cityscape with few restrictions. It offers a staggering amount of choice in how to build your character, approach quests, and confront enemies, and your decisions can have a tangible and natural-feeling impact on both the world around you and the stories of the people who inhabit it. Those stories can be emotional, funny, dark, exciting, and sometimes all of those things at once. The main quest may be shorter than expected when taken on its own and it’s not always clear what you need to do to make meaningful changes to its finale, but the multitude of side quests available almost from the start can have a surprisingly powerful effect on the options you have when you get there. It’s a shame that frustratingly frequent bugs can occasionally kill an otherwise well-set mood, but Cyberpunk 2077’s impressively flexible design makes it a truly remarkable RPG." -- Tom Marks [Full Review]

"It's the kind of game I'd upgrade for though, because Cyberpunk is a technical stunner and seeing your friends in high definition is worth the ask. Sure, The Witcher 3 was funnier, more clever and subversive, with better dialogue on the whole, but I’m taken by how relentlessly hopeful Cyberpunk is. Its exploration of a technocapitalist future relies heavily on genre tropes, with everyone from punks to dirty cops playing the part established way back in William Gibson's Neuromancer. But Cyberpunk 2077 remains a loving, faithful treatment of the genre, and one that constantly urged me to look for the silver lining in every shit-soaked gutter...I found it moving and life-affirming in the final moments, even in the face of near certain death and a relentless onslaught of bugs. I suppose it's an appropriate thematic throughline though: Cyberpunk 2077 is a game about V coming apart at the seams, in a city coming apart at the seams, in a game coming apart at the seams. Play it in a few months." -- James Davenport [Full Review]

"Like the city in which it is set, Cyberpunk 2077 may give off one impression when regarded from afar, one carefully constructed through years of marketing hype, but once players experience it up close, they’ll find that the truth is something else. On one hand, it’s a more earnest and sincere game than all its edgy marketing has suggested. On the other, though the word cyberpunk evokes a radical vision of the future, there’s nothing revolutionary on offer here. Instead, it’s a game obsessed with the past." -- Carolyn Petit [Full Review]

"In the way that Dungeons & Dragons codified Tolkienesque fantasy, Cyberpunk 2077 distills the most recognizable elements from influential fiction like Blade Runner and Neuromancer. The loosely defined cyberpunk genre began as a grounded alternative to space operas and post-apocalyptic wastelands, heavily influenced by hardboiled fiction. In the decades since, it’s so thoroughly permeated science fiction that its innovations have become cliches. Today, “cyberpunk” has two contradictory meanings: tech-heavy futuristic media that feels organically grown from present-day social conditions, and a specific set of 1980s and ‘90s-influenced retro-future noir conventions. Cyberpunk 2077 is a version of the latter." -- Adi Robertson [Full Review]

"What Cyberpunk really is, however, is a big open-world action role-playing game. What it’s not is a look at gaming’s future. Instead, it feels like a summation of where we’ve come in gaming since the Xbox 360 generation. It feels like a game built by people looking around to see what works — like Grand Theft Auto’s open world, Watch Dogs’ hacking, Assassin’s Creed’s quest-filled maps, Fallout’s combat and character progression, Mass Effect’s dialogue system, Batman: Arkham Knight’s crime scene investigations, and every games’ skill trees. At the same time, Cyberpunk doesn’t try much new. It feels big and expensive — and getting all of these parts to fit together seems like an impossible challenge. But because of this, Cyberpunk 2077 is a glimpse at where we are and not what is next." -- Jeff Grubb [Full Review]

"Cyberpunk 2077 is a game of the past and its forgotten futures. Its setting is a pastiche that was overtaken by history and technology. It is a piece of software that is a throwback to PC gaming of the 1990s and early 2000s in every possible way, and its aesthetic and narrative sensibilities of a teenage boy's bedroom in the 1980s. Yet its lavish and utterly sincere devotion to its influences recalls what has made these dated visions so alluring and enduring. Cyberpunk is too tacky and graceless to be cool, but it's very big, and very loud, and sometimes that's all it takes to be awesome." -- Rob Zacny [Full Review]

"Imagine the dense activities and detail of Kamurocho in the “Yakuza” games and other smaller role-playing titles, stretched out across miles of a proper “Grand Theft Auto” city, and you’re starting to grasp the ambition of the most anticipated game of the year...That game delivered what felt like a once-in-a-lifetime fantasy role-playing experience, with the kind of writing and interactivity we’d been hoping for in the genre. And yet, despite that praise, it will be hard for me to say anything definitive in this review — at least for now. In the time I’ve had with the game so far, I know I’ve missed out on a lot of the core experience...What makes matters worse is that this game is boiling over with glitches, particularly toward the game’s climax. As the game neared its end, every main character of the game was touched by some hilarious, scene-breaking glitch — including the very final shot of the story before the credits rolled. Whether this world holds together is a question I just can’t answer yet. My early impressions come with many caveats." -- Gene Park [Full Review]